MONTH9BOOKS ANNOUNCES A SHIMMER OF ANGELS: THE PERFECT MIX OF REAL LIFE, PSYCHIATRY and FANTASY in a YA NOVEL

Psychiatry, fantasy and real life come together in A Shimmer of Angels, as a young girl struggles with identity, secrets, and confronting her greatest fears. A Shimmer of Angels is for anyone who has ever felt like an outsider, or perhaps has felt like giving up entirely. It touches on themes of suicide, ostracism and emotional pain. The author, personally exposed to suicide through the death of a beloved family member, will donate a percentage of sales of this novel to a suicide prevention and outreach program in San Francisco, California. 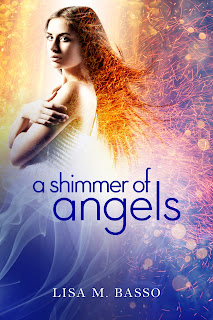 ALR: Lisa, thank you so much for being here! I imagine you were anticipating 2013 and the release of your debut novel! Did you make a New Year's resolution?
LMB: I'm usually not one for New Year's resolutions, so I didn't make one this year, but I did make a promise to myself this year. Work harder. Last year I spent a lot of time working, taking my writing to the next level, but I also spent a lot of time trying to find a balance between work and personal. This year I had a new challenge. Get as much done as I can. So far this year, I've worked on two blog tours, lived through the release of my first book, A SHIMMER OF ANGELS, and turned the second book in the Angel Sight trilogy in to my editor for revisions. So now I'm working on plotting the third and final book in the series. Not bad since it's only February.


ALR: Busy lady! A lot of people, myself included, were anticipating this release. Can you tell us a bit about the book?

LMB: A SHIMMER OF ANGELS is about sixteen-year-old Rayna who has been plagued with seeing men with wings, lost in a non-stop rotating door of therapists and mental hospitals, for several years, until her family moves to San Francisco and the sightings stop. Three months later, when Ray is just getting comfortable in her new life, she sees a set of wings on a new boy in her class on the same day one of her classmates turns up dead. Now Ray has to decide if she's willing to risk her sanity and her normal life to find out more about this boy and if he had anything to do with the death at her school.

ALR: I'm crazy about  stories that deal a bit with psychosis (pun completely intended). I don't want you to give away too many details, but when readers flip to the final page of your novel, what do you want them to feel?
LMB: After that last page, I'm hoping the readers feel the weight of what's happened to Rayna and everyone in her life. I don't want the readers to be sad by any means, but I do hope they are curious and wary and optimistic for what may happen in book two, because I sure have more up my sleeve. Cue evil laugh.


ALR: A SLITHER OF HOPE, Book 2 in the ANGEL SIGHT series, will be available from Month9Books in February 2014! So, you are reliving the publication process all over again. What was your favorite part the first time around?
LMB: So far, I've enjoyed every part of the publication process. Yes, even the many rounds of revisions and rewrites. Maybe seeing the finalized cover for the first time. Since the cover is just as important as the back cover copy, it was a really big deal to me and my publisher that we get it right. And let me tell you, they got it so right. Ten minutes after I saw it, every computer in my house had the cover for A SHIMMER OF ANGELS up on the desktop.


ALR: Writing a novel is an arduous process. Who or what inspires you?

LMB: My mom is a huge inspiration to me. She's always been the dedicated, hard-working type. While staying focused on her job and family, she also makes time for her friends and co-workers. She has the biggest heart and is the smartest, strongest woman I know.

ALR: What would you do if you won the lottery?
LMB: This would be fan-flippin'-tastic! I would quit my day job, but never writing, and travel, setting novels in all the places I've been.


ALR: If your life was a song, which one would it be?
LMB: Be Yourself by Audioslave. It isn't my favorite song in the world, but I love the message. As a teenager it took me a long time to find myself and be comfortable being who I really am. I use this song to remind me to be true to myself always.

ALR: If you could choose a superpower, what would it be?
LMB: Teleportation. I hate flying with a capital H. But I love to travel. Thus, teleportation would be wonderful. Anyone offering it up as a possibility? No...well, not yet at least. Who knows, the future could be filled with anything.


ALR: If you could go back in time, where/when would you go?
LMB: I'd go back about twenty years and spend more time with my brother. He passed away when I was young and even another minute with him would last a lifetime in my mind.


Sixteen-year-old Rayna sees angels, and has the medication and weekly therapy sessions to prove it. Now, in remission, Rayna starts fresh at a new school, lands a new job, and desperately tries for normalcy. She ignores signs that she may be slipping into the world she has tried so hard to climb out of. But these days, it’s more than just hallucinations that keep Rayna up at night. Students are dying, and she may be the only one who can stop it. Can she keep her job, her sanity, and her friends from dying at the hands of angels she can't admit to seeing?

Goodreads A SHIMMER OF ANGELS: http://www.goodreads.com/book/show/13572197-a-shimmer-of-angels


Author of THE IRON WITCH, Karen Mahoney, says, “A SHIMMER OF ANGELS has a courageous heroine who finds herself in the middle of two gorgeous angels, a fascinating world, and a story that builds to an exciting climax - I'll be looking forward to more from Lisa M. Basso!"


Lisa M. Basso was born and raised in San Francisco, California. She is a lover of books, video games, animals, and baking (not baking with animals though). As a child she would crawl into worlds of her own creation and get lost for hours. Her love for YA fiction started with a simple school reading assignment: S.E. Hinton’s The Outsiders. When not reading or writing she can usually be found at home with The Best Boyfriend that Ever Lived ™ and her two darling (and sometimes evil) cats, Kitties A and B. Lisa M. Basso is available for quotes, signings, video or podcast appearances, and all opportunities relative to A SHIMMER OF ANGELS.


Month 9 Books is a publisher of speculative fiction for teens and tweens… where nothing is as it seems. Month9Books will donate proceeds from each of its annual charity anthologies to a deserving charity. Individually, authors may donate his or her advances and royalties to a charitable organization. Month9Books will also release 10-12 non-charitable titles annually. A SHIMMER OF ANGELS is Month9Books’s first Young Adult release. Month9Books is distributed by Small Press United, a division of IPG. You may visit www.month9books.com for more information.
VISIT MONTH9BOOKS ONLINE: